Lantern Field is the first larger scale interactive site-specific art installation developed in collaboration with Aki Ishida, Benjamin Knapp, and Brennon Bortz. Funded by the National Cherry Blossom Festival and Smithsonian’s Freer Gallery of Art and Arthur M. Sackler Gallery, and co-sponsored by Virginia Tech Institute for Creativity, Arts, and Technology (ICAT), Virginia Tech National Capital Region office, College of Architecture and Urban Studies, and the School of Performing Arts (SOPA), as well as Philips Color Kinetics and the Japan Foundation New York’s arts and culture grant, the $54,000 project builds upon the previous smaller-scale collaboration of Luminous Kite Lanterns that in many ways served as the collaborative pilot. In addition, it introduces a community engagement component.

Five architecturally distinct loggias were equipped with ultrasonic proximity sensors, dedicated speakers, and LED lights. As sensors in each loggia detected increased human presence, its programmable LED lights became richer in hue, color, and tone, while the motion detected by the ultrasonic proximity sensors was translated into a virtual kinetic motion used to generate a surreal pendulum-driven melody of bamboo-like resonant chimes. Each loggia was given a specific set of pitches, while activity exceeding a predefined threshold resulted in deep notes percolating through adjacent loggias in a form of a wave. My task was implementing the interactive aural layer, including filtering captured sensor data, the pendulum simulation, and its artistic aural rendition. In the video above, you can hear a collage of the ensuing activity. 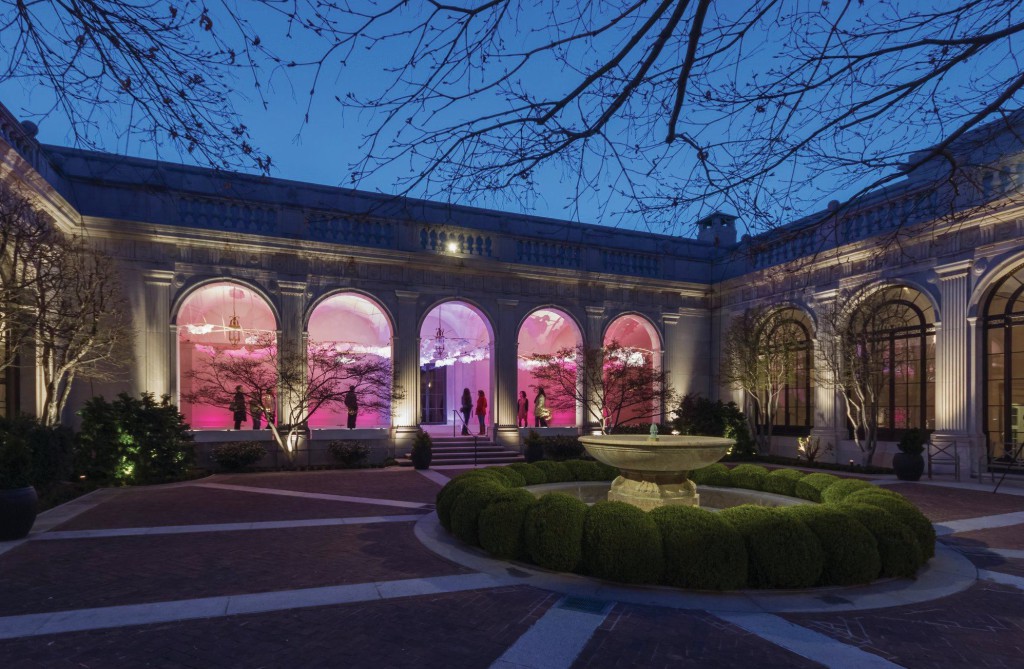 Another important aspect of this project is its community engagement. Over the course of three days, Freer gallery hosted thousands of visitors, a number of whom partook in the installation design by providing their own paper-folded lanterns that were integrated in the final installation by being suspended from the ceiling-mounted shoji screens. Some participants opted for further ornamenting their paper with drawings. Consequently, participants’ contributions became integral part of the ensuing location-aware artwork with technology posing merely as the environment designed to promote community engagement and highlight community’s contributions.

Lantern Field premiered April 5-7, 2013, as part of the 2013 National Cherry Blossom Festival and has since received a number of awards. In summer 2013, it received AL Light & Architecture Design Award. Special thanks to Philips Inc. for donating over $30,000 in programmable LED lighting for this project. Additional media materials are available on VT News, ICAT, and Esto’s websites.